That counsel was printed on the cover of the booklet that sat atop a stereo system that I recently purchased. “To obtain the best possible performance read the manual – ‘carefully and thoroughly.” Read the manual – an unfamiliar concept to most of us when we purchase new equipment – even more alien when it comes to serving on a volunteer Board of Directors! Be honest – who’s ever read a nonprofit board policy manual?

The problem in the not-for-profit sector is two-fold. First, often the material needed by Boards to support good governance simply does not exist! Second, when the material does exist, the information is not effectively shared with the volunteer Directors!

What kinds of material should be included in a Director’s Policy Manual? And to be effective, how should the information be conveyed to the volunteer Board? The purpose of this article is to address these two important questions.

Given the broad spectrum of organizations operating in the not-for-profit sector, volunteer manuals can contain a wide variety of pertinent information. However, all of the successful organizations that I have observed over the many years I have been consulting with non-profit organizations (NPOs) have always included the following specific policy documents.

In this age when society in general, and your members and stakeholders in particular, are demanding more openness, transparency and accountability, a documented Board policy on Conflict of Interest is a must for all NPOs. The policy statement should, as a minimum,

Several years ago, in a policy template developed by the BC Law Reform Commission, the following “conflict of interest” definition was recommended.

A “conflict of interest” is any situation where

(a) Your personal interests, or

(b) Those of a close friend, family member, business associate, corporation or partnership in which you hold a significant interest, or a person to whom you owe an obligation could influence your decisions and impair your ability to

(i)Act in the Society’s best interests, or

(ii)Represent the Society fairly, impartially and without bias.

The Commission noted that a “conflict of interest” exists if the decision could be influenced – it is not necessary that influence takes place.

Who should the policy cover? Not only Directors, the Commission recommended, but also anyone else who is in a position to influence decisions made on behalf of the organization. This includes the Executive Director/Chief Executive Officer (CEO), and members of committees, task forces and advisory committees that provide advice, guidance and recommendations to the Board.

Resolution of potential conflicts should be dealt with swiftly and in an unbiased and orderly manner. If a Director believes they are in a conflict of interest situation, your policy statement should outline what remedial steps the Director should take. These will generally include

A comprehensive Conflict of Interest policy statement that includes, as a minimum, the elements outlined above, will help the organization avoid embarrassing and potentially litigious situations.

A written Director’s Code of Conduct should articulate what the Directors expect from one another in terms of their preparation for the meetings, interaction at meetings and society-related behaviour outside the meetings. The greatest benefit of having this type of material discussed, debated and decided by the Board is that it results in a clear articulation of what kind of performance is acceptable to the Directors themselves.

During the last two decades, significant improvements have been made in the manner in which volunteer Boards scrutinize the Executive Director/CEO’s performance. This is true whether the organization follows the Complementary Governance model, Policy Governance model or some other governance regime.

However, an area where there continues to be a governance gap is in evaluating volunteers! Simply because volunteer Directors are generally not rewarded monetarily for their service, does not mean that they should not be held accountable for their performance! As a consequence, the Board should develop a policy position that outlines how the Director’s appraisal system will work and what will be the consequence of poor performance. It is important to note Peter Drucker’s observation on this subject. In Managing for The Future, written by Drucker over a decade ago, he wrote:

Many of today’s …  volunteers insist on having their performance evaluated against preset objectives at least once a year. And increasingly, they expect their organizations to remove nonperformers…

An important chapter in the Director’s Policy Manual should, therefore, cover the policy and mechanism used by the Directors to evaluate the performance of their colleagues on the Board, and the Board as a whole.

When this documentation has been created, the final step in order to “Obtain the Best Possible Performance” is to ensure that the Directors are fully aware of the Board’s approved policy statements. This is best accomplished by having a structured orientation program for both new and returning Directors. The orientation session should include a review of the Board’s policies and provide adequate time for answering any questions may arise about their content. A three-hour Board orientation session where the Board policies are reviewed “carefully and thoroughly” is a prudent investment – and will save the organization hours of confusion and grief as the Directors assume their role in the organization.

Maximizing board performance with a Nonprofit Board Policy Manual

During the last twenty years, non-profit governance has matured to a point where “working Boards” are now a rarity and “policy Boards” are more common in the not-for-profit sector. However, to be effective, a “policy Board” has to develop policies that are clearly articulated, clearly documented, and clearly understood by all of those involved in the process of governing. The creation of a sound Director’s Policy Manual that is used as an integral part of your Board orientation program, will significantly improve the performance of your Directors. That will make their job as governors of the organization, and yours as Executive Director/CEO, less frustrating and more rewarding. By any measure, time spent on this part of the governing process will yield major, long-term performance benefits for both the organization and the Board. 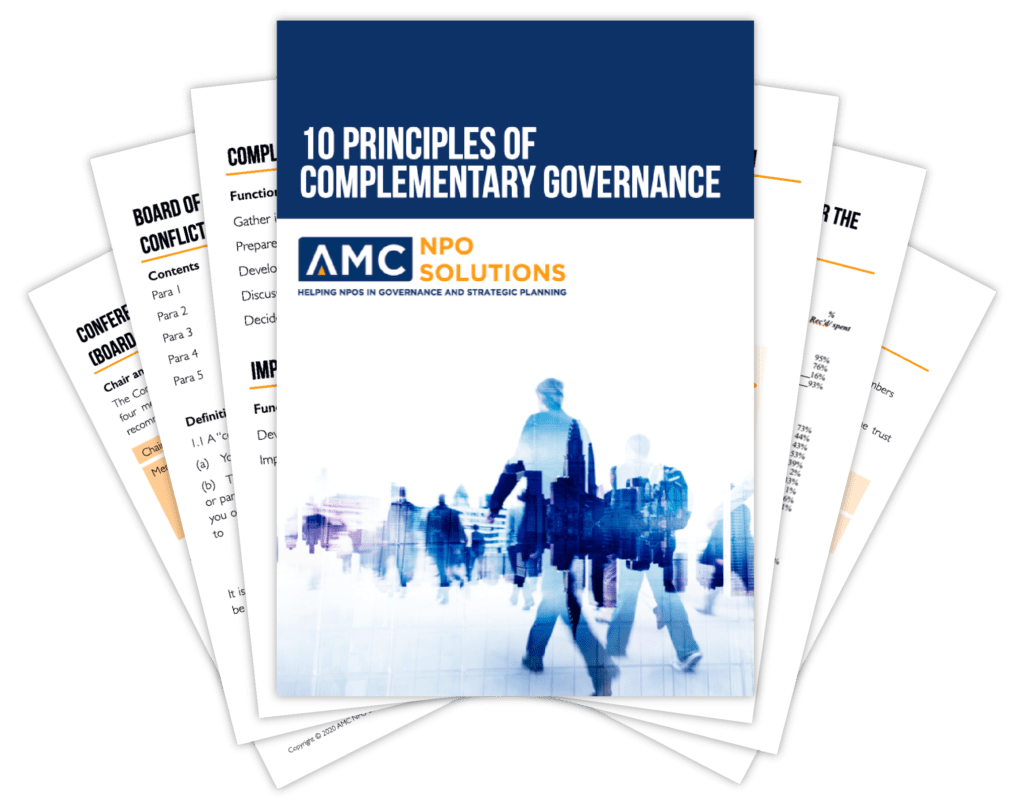